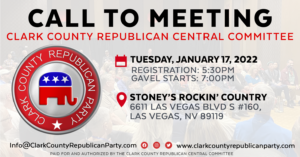 Dear Fellow Republicans,
Pursuant to § 8.1 of the Clark County Republican Central Committee (CCRCC) Bylaws, the Members of the CCRCC are hereby called to a Regular Meeting of the CCRCC, which will be called to order at 7:00PM, to be held on Tuesday, January 17, 2023 at Stoney’s Rockin’ Country. The doors will open for registration at 5:30 p.m. The Chairman’s Agenda is below this notice..

Members are urged to arrive as near to the start of registration as possible to register. Registration will begin at 5:30 p.m. Disabled persons will be accommodated at once; please come directly to the head of the line and an usher will assist you.

Vacancy to CCRP E Board – District A Trustee – 1 Open seat

If you are interested in running for any of the above positions, please send an email to self-nominate to [email protected] with your name, phone number, and the position you wish to run for, ie. NRCC seat E, no later than Tuesday, January 10, 2023. Any nominations rec’d after that will not be accepted.

We will also vote on the proposed bylaw amendment below: 7.1 Point section F are any positions as representatives of NRCC from Clark County remain vacant after elections are held for the other provisions of this chapter the Chairman shall at the CCRP meeting immediately preceding a meeting of the NRCC for which an appropriate call to meeting has been sent, request that any qualified CCRP members who wish to attend and represent the CCRP at that meeting only, providing self-nomination stating the request of the CCRP secretary either within five days of that announcement or at least five days prior to the relevant in NRCC meeting whichever is sooner and those members shall be deemed qualified to temporarily serve in that position irrespective of the commission District in which they reside. Should there be more self-nominations than vacant positions, the Chairman shall add the matter to the agenda of the next regular or special meeting of the Clark County Republican Party where the body will determine by majority vote which member Shall temporarily serve as representatives to The NRCC, if no regular meeting of the central committee IS SCHEDULED prior to the NRCC meeting in question, the Chairman may call a special meeting with the express intent of filling those positions .
Any questions on the agenda or resolutions may also be addressed to Sally Minster at [email protected]

STATE OF THE STATE